Don’t get me wrong: I love music festivals as much as the next person. They give festivalgoers the chance to exit their comparatively mundane everyday and enter whatever world said festival has whipped up. And it goes without saying what a wet dream come true they are for the music nuts among us. The unique opportunity to see tons of your favorite musicians, all in one fell swoop—at a fraction of the cost of seeing them all individually—is almost too much to handle. But therein lies the biggest problem with gargantuan festivals like Melt or Glastonbury: they can be paralyzingly overwhelming, oftentimes at the expense of the very thing these festivals were built upon (hint: the music). The overstimulation and excess render those in attendance unable to focus on anything other than trying to finally find the goddamn campsite while drunkenly wading through a darkened sea of what at 4 am seem like all identical tents.

All the more reason why I’m particularly excited about the advent of smaller, more grassroots festivals, among which is Fever Creek Festival. Founded in 2013 by six friends with a passion for underground music, Fever Creek has since done its best to showcase all of the great garage, folk, and blues musicians that tend to slip under the radar in electro-centric Berlin. Local heroes like Skiing, as well as up-and-coming international acts, have formerly graced their stages, and again this year, the lineup doesn’t disappoint. Here’s a little sneak peak of what to expect:

Bannerman
Alt-country, Berlin (and a favorite of mine from Fusion)

Tickets will be sold per day at the door; they’re 8-10€ for Friday and 5€ for Saturday. For more details, head over to Fever Creek’s website.

Two days, two venues, and a whole lotta good music: under 20€
//
Not being confronted with a fellow festivalgoer’s feces art on the Dixi porta-potty wall: priceless 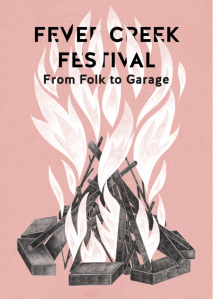