For some reason, I was heartily unimpressed with the Berlin Festival lineup this year, so I decided instead to only attend its smaller sister festival, First We Take Berlin. Here were the highlights and hidden treasures:

Parisian band We Were Evergreen makes the kind of pop that counteracts the shit that gives the genre a bad name (I’m looking at you, One Direction). Their inventive use of the xylophone and synth, coupled with your not-so-atypical guitar and drums breathes life into their songs. Their shows are also just incredibly fun; I dare you not to smile after listening to them. 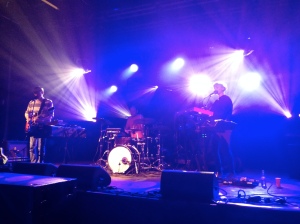 I feel like Amatorski could easily be the music baby of Sigur Rós and The xx. They definitely make music with post-rock leanings, but the way that Inne Eysermans’s voice lilts from note to note brings everything back from the abyss. They incorporate a really nice array of electronic elements, which gives the music momentum and never allows things to get stagnant. FYI, I highly recommend listening to this on headphones.

This is the most Animal Collective-y band that I’ve ever heard (well, that isn’t Animal Collective), and I mean that in the best way possible. Beaty Heart’s music is trippy and high energy, but not without nuance. A good chunk of the songs on their debut album, Mixed Blessings, are very percussion-driven, giving way to rollicking Afro-Caribbean passages that certainly don’t need more cowbell. If you’re looking for some quirky, fun, but still substantial music to dance your heart out to, look no further than Beaty Heart. 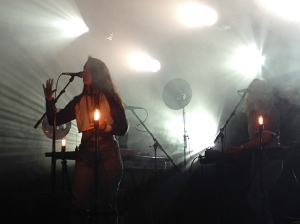 To say that Highasakite makes powerful music is an understatement. Their music sounds as grandiose and awe-inspiring as the landscapes of their Norwegian homeland. The lyrics on their album Silent Treatment read like a novel, one whose pages you consume as fervently as any just-released Harry Potter book. Aside from all of this, I have to say that the thing I find most remarkable about Highasakite is the voice of lead singer Ingrid Helene Håvik; she sings with an aching urgency and a timbre that’s unique in it’s almost tribal quality, sounding simultaneously raw yet pleasant.

How I love this band, oh let me count the ways. From lead singer Monica Martin’s sultry, smoky voice to the perfectly timed handclaps and quirky, carefree whistling, what’s not to like? PHOX’s influences seem to include anything from barbershop quartets to pure Americana, but it all just effortlessly blends in an aurally lovely melting pot. Suffice it to say that they’re definitely in the running for my “New Favorite Band.” For those of you in Berlin, brace yourselves for what should be a fantastically awesome PHOX show at Privat Club in November.

Unfortunately, as summer comes to a close, so does festival season. But, fear not! the music never stops here, so until next time…

One thought on “First They Took Berlin : Best acts from the FWTB Festival”